A network of volunteers for all interested in medical education on the island of Ireland met in Belfast yesterday. The network’s aim is to improve education. Network’s vision:

“The Network seeks to enhance medical education on the island of Ireland by bringing together individuals and organisations with an interest in and responsibilities in medical and healthcare education in a National Medical Education Network.” 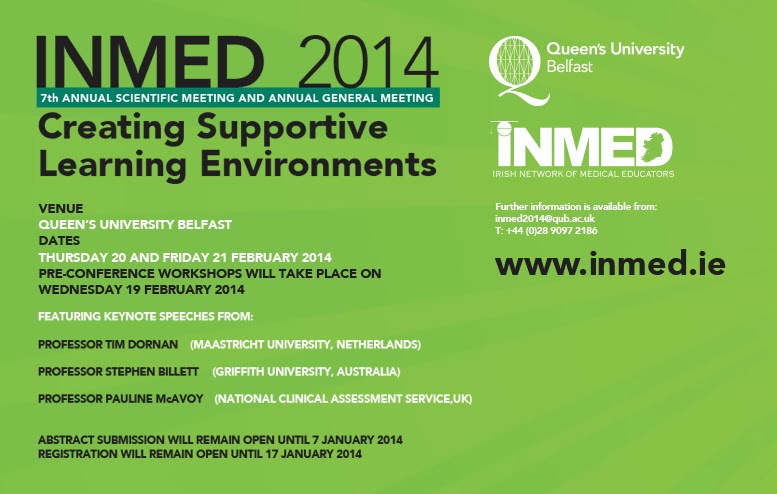 This year, the programme extended over two half-days and a full day between them.
The Wednesday half day offered five pre-conference workshops: Maximising clinical education opportunities, Researching clinical workplaces, Identifying trainees in difficulty, Overcoming obstacles to reflective practice, and Mixed methods research. As of Tuesday, February 18 (8am), there were 152 names on the delegate list. Of those, 7 were marked as judges, 4 as chairs, and 4 as chair/judge – a transparent practice rather unusual at conferences.

Thursday was the main day of the conference. It started with the usual welcomes and opening addresses in a packed room. In fact, delegates who came late stood in the back of the room, because there were no free seats left.

Two keynotes attracted most delegates, Prof Billet from Australia and Prof McAvoy from Britain. Prof Billet’s lecture was pre-recorded and projected on a large screen, because he was in Geneva at the time of conference. He explained meaning of important education terms, such as curriculum or apprenticeship. In simple words, he talked about learning by doing, but his theory-heavy talk with big words was difficult to follow in some places, as reported by delegates. The organizers helped the audience by pausing the video, interacting with the audience, and letting 20 seconds of silence for free-flow thinking

Doctors in difficulty and the re-mediators were discussed by Prof McAvoy (shown in Figure 2). Her talk reminded us that doctors are people too. Most are motivated, they’re not burned out. The reasons for their underperformance are subject of McAvoy’s research: professional, personal, physical health (e.g., high blood pressure), or mental health problems; the group identified 18% of cognitive problems among doctors, and in one case recommended psychiatric assessment which ended doctor’s career. Comprehensive assessment of underperforming doctors is critical – if you’re not getting the diagnosis right, the treatment won’t be effective. Following the assessment, absolute clarity of feedback is paramount for performance improvement.

An hour and a half before the lunch, the delegates viewed 77 research and education posters. Judges assessed the posters allowing 3 minutes for presenters’ speech plus a couple of question.

Lunchtime provided opportunities for meeting the experts. After lunch, the delegates scattered into 5 workshops: i. student narratives (n= 6), ii. clinical ethics (n= 15), iii. emotional intelligence (n= 12), iv. organizational culture (n= 13), and v. emotions (n= 16). The numbers of delegates who attended workshops but did not put their names on the list are not included. Students led the mental health session from 4-5PM. The day finished with traditional AGM, drinks and dinner.

Friday half day concluded the conference with four sessions including research presentations, keynote speech by Prof Dornan from Netherlands, and hot topics in medical education. Read more about the conference here: www.inmed.ie