By Siobhan Maguire
Article from The Sunday Times, 21 September 2014, p4

The department of healthis reviewing distribution of Naloxone, a drug that reverses overdose, to buddies and families of heroin users. A similar scheme is in use in Britain. The department is in discussions with the Health service executive (HSE) to make the emergency drug more widely available. Currently, it is a prescription-only medication and can only be used by the person for whom it is prescribed, or by ambulance crews and medical staff.
[…] 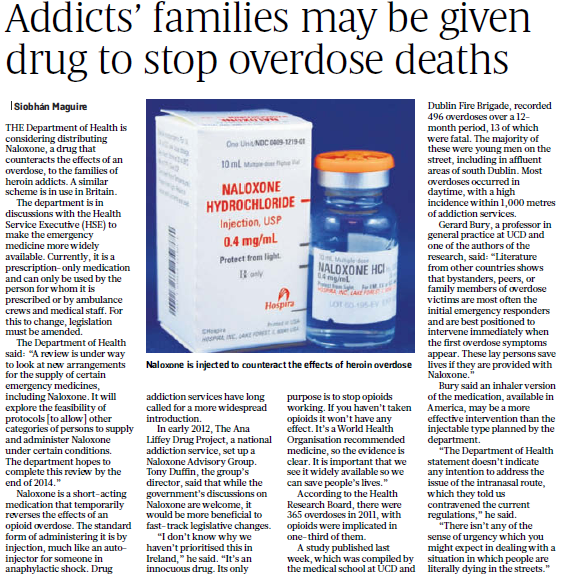 On July 6th, 2012, The Ana Liffey Drug Project, a national addiction service, set up a Naloxone Advisory Group. Tony Duffin, the group’s director, said that while the government’s discussions on Naloxone are welcome, it would be more beneficial to fast-track legislative changes. “I don’t know why we haven’t prioritized this in Ireland,” he said. “It’s an innocuous drug. Its only purpose is to stop opioids working. If you haven’t taken opioids, it won’t have any effect. It’s a WHO recommended medicine, so the evidence is clear. It is important that we see it widely available so we can save people’s lives.”
A [our] study* published last week, which was compiled by the medical school at UCD and the Dublin Fire Brigade recorded 496 overdoses over a 12-month period, 13 of which were fatal. The majority of these were young men on the street, including in affluent areas of south Dublin. Most overdoses occurred in daytime, with a high incidence within 1000 meters radius of addiction services. Gerard Bury, a professor in general practice at UCDand one of the authors of the research, said: “Literature from other countries shows that bystanders, peers, or family members of overdose victims are most often the initial emergency responders and are best positioned to intervene immediately when the first overdose symptoms appear. These lay persons save lives if they are provided with Naloxone.”
Bury said Naloxone in a form of intranasal spray, available in America and Scotland, may be a more effective intervention than the injectable type planned by the department. “The Department of Health statement doesn’t indicate any intention to address the issue of the intranasal route, which, they told us, contravened the current regulations,” he said. “There isn’t any of the sense of urgency which you might expect in dealing with a situation in which people are literally dying in the streets.”
To read the magazine article, go to: http://www.thesundaytimes.co.uk/sto/
Related articles:
*Cited study: Urban Overdose Hotspots: A 12-Month Prospective Study in Dublin Ambulance Services http://www.ajemjournal.com/article/S0735-6757(14)00510-5/abstractby Jan Klimas, PhD, Martin O’Reilly, Mairead Egan, Bc, Helen Tobin, BSc, Gerard Bury, MD. Published Online: July 30, 2014
See also, my previous posts summarizing the quoted study: Urban Overdose Hotspots: New Paper out Now
Dublin ambulances see an opioid overdose every day; many times near the methadone clinics. Do people shoot heroin around methadone clinics? Yes. The common sense confirms anecdotal evidence from everyday experience of clinic staff and methadone users. Although this is no rocket science for most of us, it’s much harder to prove it. Regardless of the location, the high number of overdoses in Dublin calls for an immediate distribution of the heroin antidote – Naloxone. Visit my previous post for more info on our pilot Naloxone project.
See also, my previous post on Overdose Education and Naloxone: Workshop for Family Medicine Trainees in Ireland