Training in addiction medicine gives clinicians early intervention tools, prevents the escalation of addiction and prevents costly and lengthy treatment. The problem is that very little information exists on the treatment workforce. It seems that most health systems do not have enough providers trained in addiction medicine to reduce the public health consequences of this increasing societal problem. In 2014, the Boston-based Advocates for Human Potential, Inc., developed a so-called Provider Availability Index. It measures the gap between the need for and availability of trained healthcare providers, but similar efforts have not been done in Canadian setting. This paper briefly describes mathematical estimates of the number of skilled addiction care providers in British Columbia, Canada, and offers recommendations for steps that can be taken immediately to increase provider availability. The article was published ahead of print in the Journal of Addiction Medicine on May 13, 2016 and the suggested citation is:
McEachern, J., Ahamad, K., Nolan, S., Mead, A., Wood, E., & Klimas, J. (9000). A needs assessment of the number of comprehensive addiction care physicians required in a canadian setting. J Addict Med, Publish Ahead of Print. doi:10.1097/adm.0000000000000230
http://journals.lww.com/journaladdictionmedicine/Abstract/publishahead/A_Needs_Assessment_of_the_Number_of_Comprehensive.99628.aspx
April 4: Methadone is a medication used in treatment of people with dependence from heroin or other opioids. Many people who take it drink too much alcohol. We don’t know whether it’s because or in spite of taking this medication. We wanted to know the impact of enrolment in methadone treatment on the onset of heavy drinking among people who use heroin.
Our approach: We analysed information from thousands of interviews from long-term, community-based studies of people who inject drugs in Vancouver, Canada, between December 1, 2005 and May 31, 2014.
What have we found: In total, 357 people who use heroin were included in this study. Of these, 58% enrolled in methadone at some point between 2005-2014, and 32% reported starting to drink heavily. Those who started the treatment said they drank less compared to those who did not start it. It didn’t even make them start drinking faster than those who did not start taking methadone. People who started drinking heavily when they enrolled in methadone were younger than those who did not start drinking heavily. They also used more cannabis.
What does this mean: It is clear that many people in the methadone treatment have problems with alcohol. It seems that they do not drink because they take this medication which may even appear to decrease the initiation of heavy drinking. Our findings suggest younger age and cannabis use may predict heavy drinking. These findings could help inform on-going discussions about the effects of opioid agonist therapy on alcohol consumption among people who use heroin.
This blog is based on article was Accepted for publication in the European Addiction Research Journal on January 31, 2016. The full title of the article is: The Impact of Enrolment in Methadone Maintenance Therapy on Initiation of Heavy Drinking among People who Use Heroin. The authors of the article are following:
Jan Klimas
Evan Wood
Paul Nguyen
Huiru Dong
M-J Milloy
Thomas Kerr
Kanna Hayashi

The year was 1996 and Ireland was recovering from a recent heroin epidemic. Methadone, a medical replacement drug for heroin, was jut making its way into specialised clinics in Dublin.

Professor Gerard Bury and colleagues had a revolutionary idea that people who use drugs can receive agonist drugs, like methadone, from their family doctors.

The opioid agonist treatment has substantially changed the course of the drug use epidemic. Yet, many continue to die and suffer from chronic diseases. In Ireland, everybody who’s prescribed this medication has to be registered with the Central Treatment List.

In this new study, we wanted to revisit a group of people who were the first to receive their agonist medication, i.e., methadone in the primary care in Ireland.
At follow-up in 2013, 27 (27.6%) of the 98 people had died in Ireland and had relevant entries in the Register of Deaths, 19 (19.4%) were currently in OAT and the status of the remaining 52 (53%) was ‘alive,’ as per the Irish death registry.
The 52 patients ‘alive’ had left the Central Treatment List, but no further information was available on their status.

“Our inability to establish the interval data for the retention in treatment is a significant study limitation, but the overall retention of 19 out of the surviving 71 patients is comparable to previous research.”

The deceased died of multiple causes; only six had a single cause. Drug toxicity, overdose, or both, were the most common causes of death.
Cited study:
Jan Klimas, Anna Keane, Walter Cullen, Fergus O’Kelly, and Gerard Bury (2015) Seventeen year mortality in a cohort of patients attending opioid agonist treatment in Ireland. European Journal of General Practice (http://dx.doi.org/10.3109/13814788.2015.1109076)
Dublin ambulances see an opioid overdose every day; many times near the methadone clinics. Do people shoot heroin around methadone clinics? Yes. The common sense confirms anecdotal evidence from everyday experience of clinic staff and methadone users. Although this is no rocket science for most of us, it’s much harder to prove it.

Just as the presence of storks doesn’t cause the explosion in birth rates, methadone clinics don’t cause people to use and overdose on heroin at their door steps. Most overdoses in our study were within 1000 metres radius around the clinics, it means that they were not in the immediate vicinity of clinics. Regardless of the location, the high number of overdoses in Dublin calls for an immediate distribution of the heroin antidote – Naloxone. Visit my previous post for more info on our pilot Naloxone project.
Cited study: Urban Overdose Hotspots: A 12-Month Prospective Study in Dublin Ambulance Services http://www.ajemjournal.com/article/S0735-6757(14)00510-5/abstract
Study authors:
Jan Klimas, PhD, Martin O’Reilly, Mairead Egan, Bc, Helen Tobin, BSc, Gerard Bury, MD
Received: June 6, 2014; Received in revised form: June 26, 2014; Accepted: July 2, 2014; Published Online: July 30, 2014
DOI: http://dx.doi.org/10.1016/j.ajem.2014.07.017
Publication stage: In Press Accepted Manuscript

The Forum magazine is the official journal of the Irish College of General Practitioners ICGP. Published monthly by MedMedia since 1991, it is Ireland’s premier journal of medical education.

In January, the journal published a clinical review by McGowan et al (2014)1 which provides a reader-friendly summary of the evidence on the brief interventions in primary care. We commend the authors for that but also wish to highlight the additional challenges involved in implementing brief interventions for at-risk groups including people who also use other drugs, in economically challenging times. 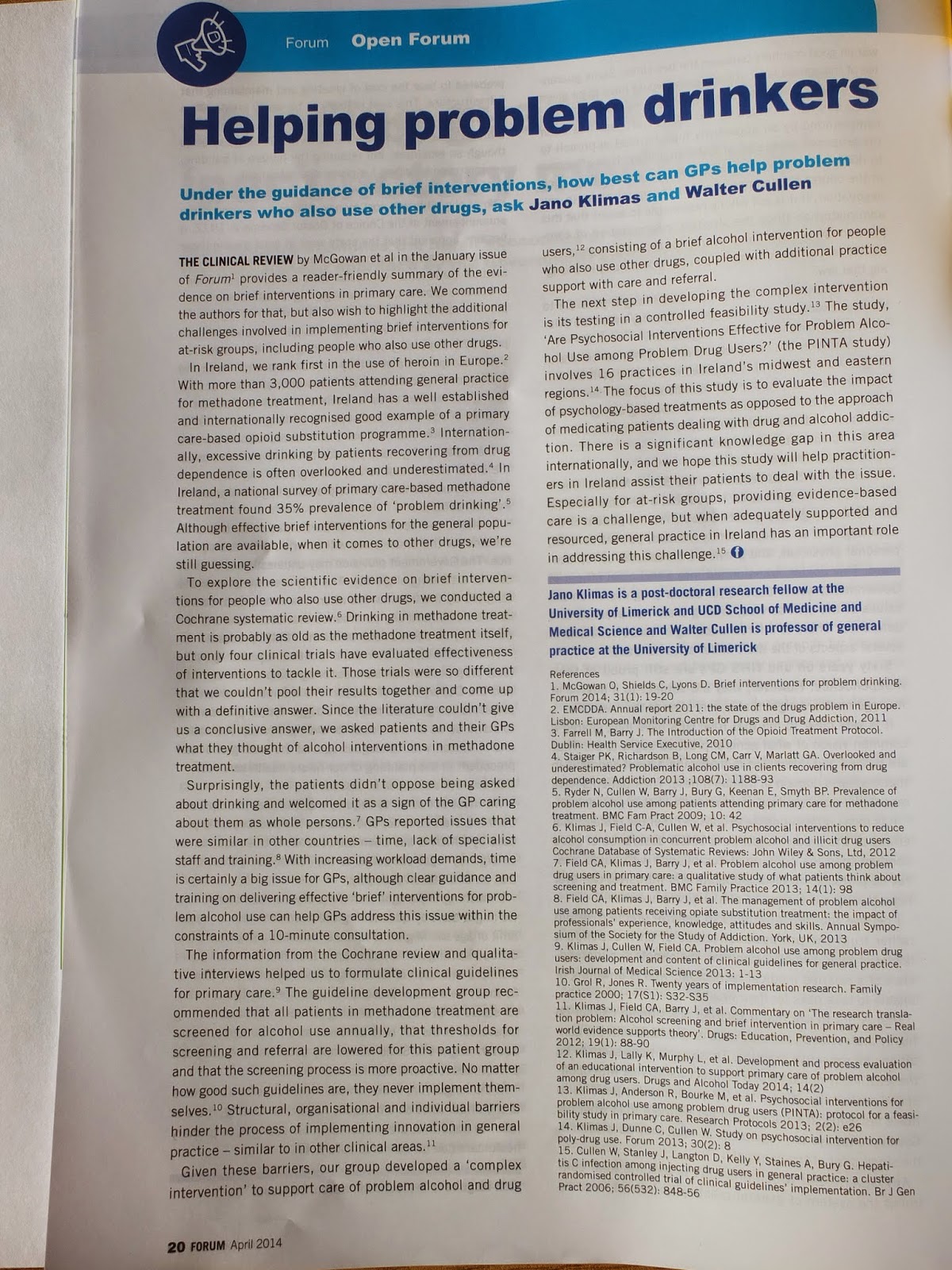 In Ireland, we rank first in the use of heroin in Europe2. With more than 3000 patients attending general practice for methadone treatment, Ireland has a well-established and internationally recognised good example of primary-care based opioid substitution programme 3. Internationally, excessive drinking by patients recovering from drug dependence, is often overlooked and underestimated4. In Ireland, a national survey of primary-care based methadone treatment found 35% prevalence of ‘problem drinking’5. Although effective brief interventions for the general population are available, when it comes to other drugs – we’re still guessing.

To explore the scientific evidence on brief interventions for people who also use other drugs, we conducted a Cochrane systematic review6. Drinking in methadone treatment is probably as old as the methadone treatment itself, but only four clinical trials evaluated effectiveness of interventions to tackle it. Those trials were so different, that we couldn’t pool their results together and come up with a definitive answer. Since the literature couldn’t give us a conclusive answer, we asked patients and their GPs what they think of alcohol interventions in methadone treatment. Surprisingly, the patients didn’t oppose being asked about drinking and welcomed it as a sign of GP caring about them as whole persons7. GPs reported issues that were similar to other countries – time, lack of specialist staff and training8. With increasing workload demands, time is certainly a big issue for GPs, although clear guidance and training on delivering effective ‘brief’ interventions for problem alcohol use can help GPs address this issue within the constraints of a ten-minute consultation.
The information from the Cochrane review and qualitative interviews helped us to formulate clinical guidelines for primary care 9. The guideline development group recommended that all patients in methadone treatment are screened for alcohol annually, that thresholds for screening and referral are lowered for this patient group and that the screening process is more proactive. No matter how good such guidelines are, they never implement themselves10. Structural, organisational and individual barriers hinder the process of implementing innovation in general practice – similar to other clinical areas 11.
Given these barriers, our group developed a ‘complex intervention’ to support care of problem alcohol and drug users 12, consisting of a brief alcohol intervention for people who also use other drugs, coupled with additional practice support with care and referral. The next step in developing the complex intervention is its testing in a controlled feasibility study 13. The study, ‘Are Psychosocial INTerventions Effective for Problem Alcohol Use among Problem Drug Users’ (the PINTA study) involves 16 practices in Ireland’s Midwest and Eastern regions14. The focus of this study is to evaluate the impact of psychology based treatments as opposed to the approach of medicating patients dealing with drug and alcohol addiction. There is a significant knowledge gap in this area internationally and we hope this study will help practitioners in Ireland assist their patients to deal with this issue 15… Read more at www.icgp.ie
Bibliography
1. McGowan O, Shields C, Lyons D. Brief interventions for problem drinking. Forum 2014;31(1):19-20.
2. EMCDDA. Annual report 2011: the state of the drugs problem in Europe. Lisbon: European Monitoring Centre for Drugs and Drug Addiction, 2011.
3. Farrell M, Barry J. The Introduction of the Opioid Treatment Protocol. Dublin: Health Service Executive, 2010.
4. Staiger PK, Richardson B, Long CM, Carr V, Marlatt GA. Overlooked and underestimated? Problematic alcohol use in clients recovering from drug dependence. Addiction 2013;108(7):1188-93.
5. Ryder N, Cullen W, Barry J, Bury G, Keenan E, Smyth BP. Prevalence of problem alcohol use among patients attending primary care for methadone treatment. BMC Fam Pract 2009;10:42.
6. Klimas J, Field C-A, Cullen W, O’Gorman Clodagh SM, Glynn Liam G, Keenan E, et al. Psychosocial interventions to reduce alcohol consumption in concurrent problem alcohol and illicit drug users. Cochrane Database of Systematic Reviews: John Wiley & Sons, Ltd, 2012.
7. Field CA, Klimas J, Barry J, Bury G, Keenan E, Smyth B, et al. Problem alcohol use among problem drug users in primary care: a qualitative study of what patients think about screening and treatment. BMC Family Practice 2013;14(1):98.
8. Field CA, Klimas J, Barry J, Bury G, Keenan E, Lyons S, et al. The management of problem alcohol use among patients receiving opiate substitution treatment: the impact of professionals’ experience, knowledge, attitudes and skills. Annual Symposium of the Society for the Study of Addiction. York, UK, 2013.
9. Klimas J, Cullen W, Field CA. Problem alcohol use among problem drug users: development and content of clinical guidelines for general practice. Irish Journal of Medical Science 2013:1-13.
10. Grol R, Jones R. Twenty years of implementation research. Family practice 2000;17 (Suppl 1):S32-S35.
11. Klimas J, Field CA, Barry J, Bury G, Keenan E, Lyons S, et al. Commentary on ‘The research translation problem: Alcohol screening and brief intervention in primary care – Real world evidence supports theory’. Drugs: Education, Prevention, and Policy 2012;19(1):88-90.
12. Klimas J, Lally K, Murphy L, Crowley L, Anderson R, Meagher D, et al. Development and process evaluation of an educational intervention to support primary care of problem alcohol among drug users. Drugs and Alcohol Today 2014;14(2).
13. Klimas J, Anderson R, Bourke M, Bury G, Dunne C, Field CA, et al. Psychosocial interventions for problem alcohol use among problem drug users (PINTA): protocol for a feasibility study in primary care. Research Protocols 2013;2(2):e26.
14. Klimas J, Dunne C, Cullen W. Study on psychosocial intervention for poly-drug use. Forum 2013;30(2):8.
15. Cullen W, Stanley J, Langton D, Kelly Y, Staines A, Bury G. Hepatitis C infection among injecting drug users in general practice: a cluster randomised controlled trial of clinical guidelines’ implementation. Br J Gen Pract 2006;56(532):848-56.